Subscribe to our newsletter to get the latest updates

We use cookies to offer you a better experience of using our website and helping children. But we won’t do that without your permission.

Tabletochki Charity Foundation takes care of your personal data and does everything possible to protect it. The data we collect is divided into two categories: technical information, such as an IP address or a device type, and data that a user provides to us, such as a name or an email address.

Technical information is used to operate, maintain, and improve our website.

Data provided by the user is used to identify your donation correctly and to be able to send you our regular reports and answer your further questions.

«When you find out that your child has cancer, your blood runs cold. But, it turns out, there is something worse – the war»

«When you find out that your child has cancer, your blood runs cold. But, it turns out, there is something worse – the war,» said Valeria. She is a mother of 1.5-year-old Hrysha. In this picture, her son sleeps peacefully in one of the polish hospitals, which provides medical care for children with cancer evacuated from Ukraine. 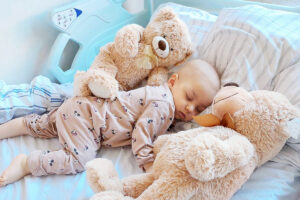 Since the beginning of the war, Tabletochki Foundation helped evacuate more than 260 children. Now, they continue fighting cancer in safe places abroad.

Hrysha has an exhausting road to the hospital in Poland behind and a long road to recovery. Valeria tells how she and her son went through the first days of the war.

«Hrysha has been receiving treatment for blood cancer at the Kyiv Regional Oncology Center for the last six months. He has been provided with necessary medical care and support from the Foundation.

One day we woke up because of the sound of explosions. It was unexpected and horrifying. We were scared and in a panic. However, there was hope that it was some mistake, a coincidence. Unfortunately, the situation was rapidly deteriorating. There were more explosions. Their sound was closer and closer.

We ignored hospital safety rules for sick kids like my son. Children with cancer have no immunity, so they need sterile conditions. Instead, we spent nights in the hospital’s basement, which served as a bomb shelter.

Every time there was an air raid siren, we carried our children from the seventh floor to the basement to protect them from the explosions.

There we slept on the floor. It was terrifying, like a bad dream.

We could not continue treatment. And that was the worst part.

Due to the abrupt invasion of our country, due to the attack of terrorists – russia and the russian army, we were unable to continue treatment at home in Kyiv, Ukraine.

We were evacuated to Poland. We are lucky, and we are grateful.

The Foundation continues to work and accept new applications for help

You have successfully subscribed to the newsletter.